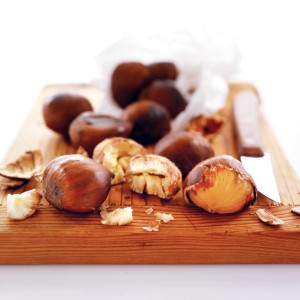 Chestnuts (also known as marrons in France and some parts of Europe) are very popular type of nuts all over the world. These nuts are cultivated in the Mediterranean for at least 3,000 years, in China for more than 2,000 years and in Japan since the 11th century and first introduced to Europe via Greece (Castanea sativa), while in America other type (Castanea dentate) is more popular. Until a bligh in the early 20th century they were common in North America. Today the majority of chestnuts are imported from Japan, China, Spain, and Italy. These nuts also become a part of tradition – they are given to the poor as a symbol of sustenance on the Feast of Saint Martin and are also traditionally eaten on Saint Simon’s Day in Tuscany.

Chestnuts are large seeds of the sweet chestnut tree. The timber of chestnut tree looks a bit like the oak (in colour and texture) and is highly valuated. The tree can live up to five hundred years. They have a case is called a burr. Nuts are picked from October to December.

Chestnuts are the only low-fat nuts (contain only 1 gram of fat and less than 70 calories per 30 grams). They are a bit lower in vitamins and minerals, but still nutritious and provide some carbohydrate. Chestnuts are the only nuts that contain vitamin C (100 grams of chestnuts supply 45% of the RDA of vitamin C). These nuts also contain twice as much starch as potatoes and because of this somewhere they are grounded into a meal for bread making.

Chestnuts are peeled and cooked before using – they can be roasted in shells, candied, boiled, braised or pureed. As well, the nuts increase their caloric intake once they‘re boiled.

How to prepare chestnuts